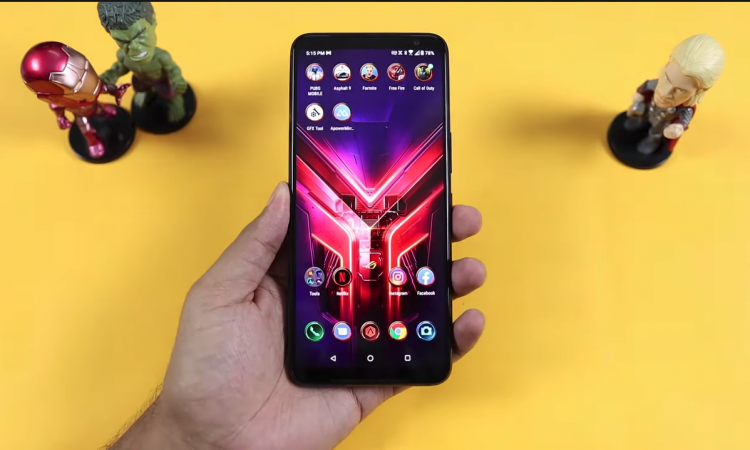 The ASUS ROG Phone 3 is the third iteration of ROG Phone after the Taiwanese company entered the gaming smartphone business in 2018. Last year, the second-gen ROG Phone 2 created quite a buzz coming in cram-packed with specs and features and aggressive gaming-themed design at an affordable price.

The ROG Phone 3 further builds on the ROG Phone 2 in terms of hardware even if it is slightly toned down in its aggressive look to entice even those customers who are not inclined towards gaming but are flagship phone users.

We have been using this gaming beast for the last few days and tried to find out if the device lives up to the expectations relative to its claims on paper. Here is what we have to say about the different aspects of the phone in this review. Read on.

Besides the ROG Phone 3 in only Black Glare color option, we drew out a SIM ejector pin, a nice-looking ROG-themed sticker, a USB Type-C cable, and a 30W charging adapter versus an 18W bundled charger of the ROG Phone 2. We also found an aerodynamic back case with a few cutouts meant for not concealing the phone’s vents and design features.

The ROG Phone 3 looks from scratch a gaming phone with the same shape, dimensions, and customizable RGB lightings on the rear logo as the ROG Phone 2. But, the former has less aggressive geometric visuals this time. Also, the copper heat sink on the glass back is now under a transparent window.

At the back, the phone has a horizontal camera setup like earlier, but it now includes three cameras instead of two. The same-sized display features no notch or a punch-hole, ensuring a clean and seamless viewing experience; however, it has chunkier bezels on the top and bottom, featuring two front-firing speakers. 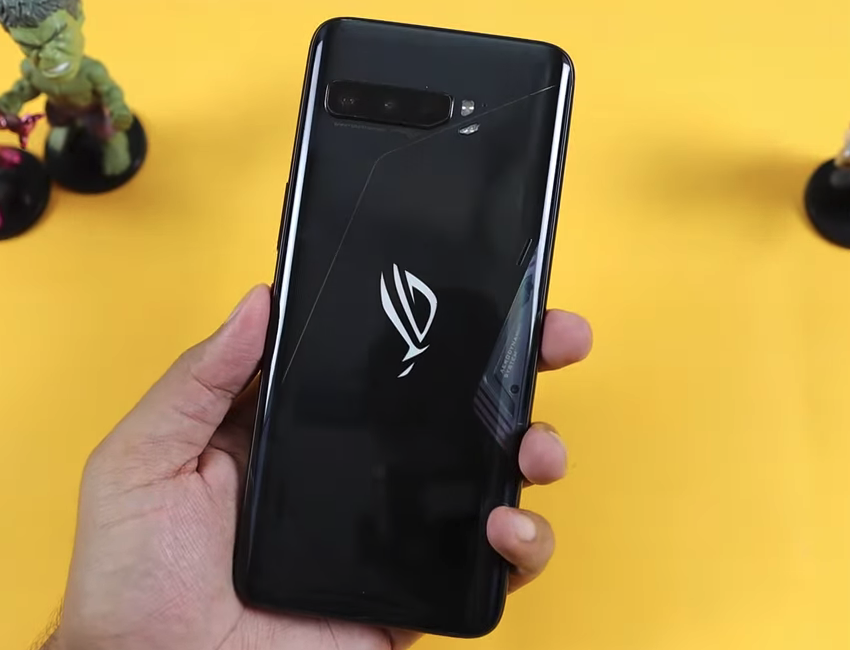 In terms of ports and buttons, the ROG Phone 3 has the volume rocker and power button on the right side alongside two capacitive AirTriggers. There are two USB Type-C ports, one at the bottom for charging and one on the left side for charging and attaching external accessories such as AeroActive cooler. The left side also features a dual-Nano SIM card tray.

Due to the massive 6,000mAh battery and added layers of cooling mechanism, the handset weighs a significant 240 grams, which will need a couple of days of getting used to. The ROG Phone 3 is also pretty robustly built and fortified by Gorilla Glass 6 on the front and Gorilla Glass 3 on the back.

The ROG Phone 3’s AMOLED display is of 6.59 inches with FHD+ (1080×2340) resolution, 19.5:9 aspect ratio, HDR 10+ support, and 650 nits of maximum brightness. The display is bright and crisp, with no legibility issue under the sun. The 144Hz refresh rate makes it highly smooth. The best benefit of a high refresh rate will, however, be realized at the time of gaming; sadly, very few games currently support a 144Hz refresh rate. To save you some battery, the refresh rate ranges from 60Hz, 90Hz, 120Hz, to 144Hz, and self-adapts as per the content’s nature. 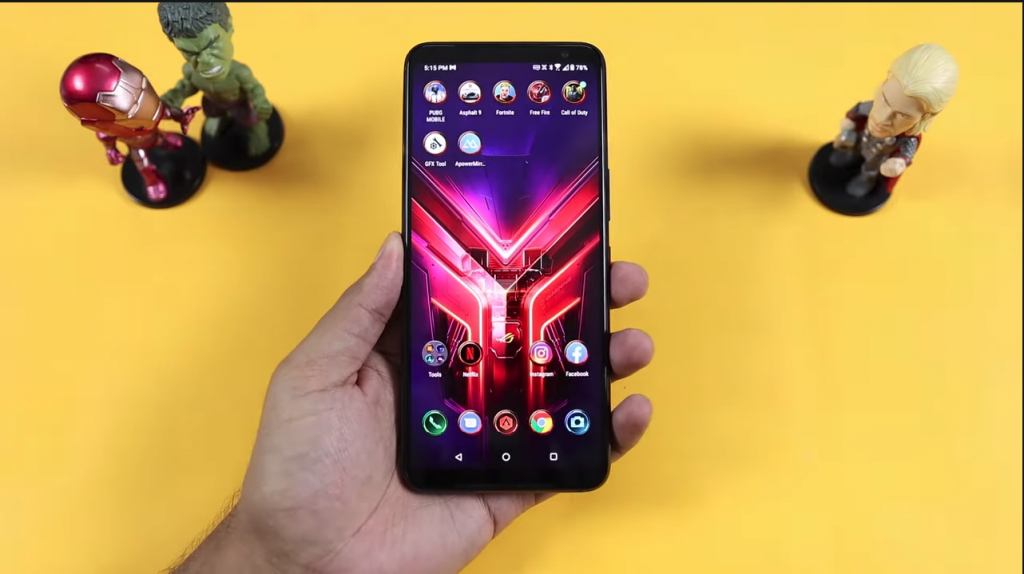 The AMOLED display features an in-display fingerprint scanner, which is appreciably quick and accurate all the time. The front camera also serves as face unlock, which is again brisk in recognizing faces. A mask-covered face during the COVID-19 times could be an issue, though. Overall, this is undoubtedly one of the best display you will currently find in a smartphone.

The ROG Phone 3 is helmed by Qualcomm Snapdragon 865 Plus SoC and an overclocked Adreno 650 GPU. Our test unit was based on 8GB LPDDR5 RAM and 128GB UFS 3.1 default storage. There is also a 12GB RAM and 256GB storage model available in the market. The gaming phone is 5G compatible, but the latter is still not available in the country. 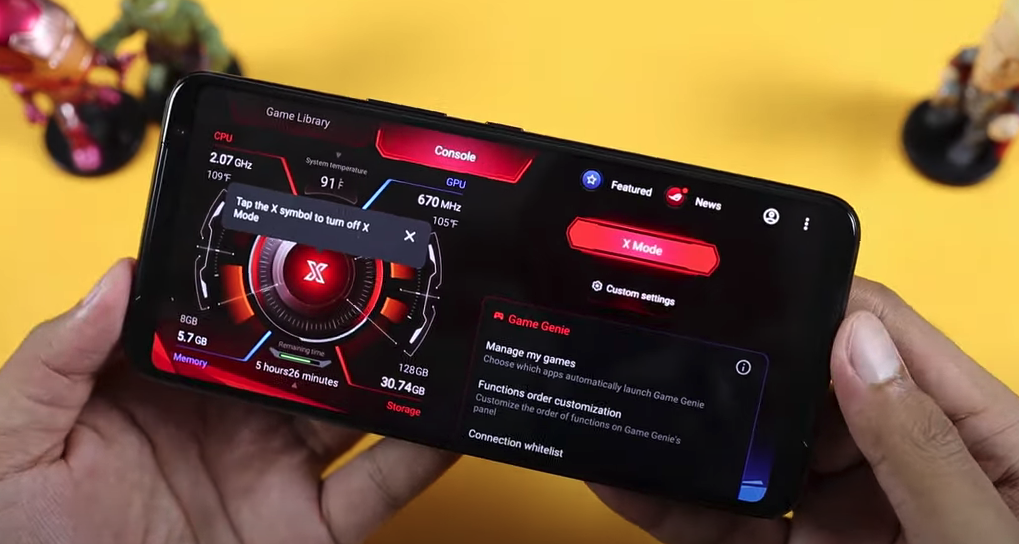 During our usage, the apps were quick to load and open. Switching between them was quite smooth. We played PUBG and Asphalt with even extreme settings and didn’t face any lag or hiccups. The overall gaming experience was buttery smooth. This is currently our go-to device for PUBG with rock-stable 60 FPS during even hot drops in Sanhok Bootcamp.

On the software front, the smartphone runs Android 10 with ROG UI or Zen UI on top, whichever you like. The latter gives nearly stock android experience. The software has an X-mode within the Armory Crate app designed for gaming. Once this mode is selected, you can change the processor overclock settings, RGB lighting effects, and tweak the AirTriggers- two pressure-sensitive touch sensors on the right side- designed to make the gaming experience quite immersive. 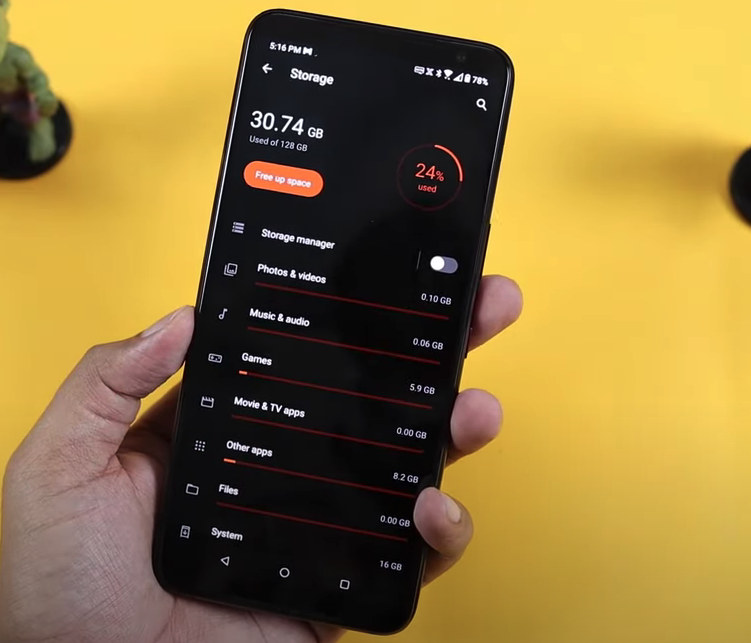 Each of the AirTriggers can also be split into two, giving you four fingers control akin to the gamepad’s trigger buttons. The front-firing speakers are loud and clear, regardless of how you hold the phone. The multi-layer cooling system helps the phone check its thermal in control; however, we noticed the phone did reach up to 47 degrees celsius after a long session of gaming.

Unlike the previous ROG Phones, the ROG Phone 3 has better cameras in the quest for becoming a well-rounded flagship aside from being a gaming phone. Triple rear camera array has a 64MP f/1.8 Sony IMX686 primary sensor leading the way. The other two sensors include a 13MP f/2.4 ultra-wide sensor and a 5MP macro sensor. The front-facing camera is rated at 24MP with f/2.0 aperture.

The primary camera takes quad pixel-binned images that appear crisp, sharp, and detailed in daytime conditions. The color balance was accurate most of the time. The wide-angle sensor captured decent photos; at the same time, the macro sensor offered surprisingly good results.

The selfies were also impressive except when shooting against the light. Nevertheless, the quality of shots deteriorated in the low light conditions; however, the night mode came to rescue. Overall, the camera experience was found to be above average.

A 6,000mAh battery helps the phone to hold up for a long time. A 100 per cent charge, filling in little over 100 minutes via a 30W charging adapter, can ensure a day and a half of moderate to high usage. We didn’t find the battery to be aggressively depleting while gaming.

The ROG Phone 3 has several modes that optimize battery life, such as limiting the charging speed to 10W and selecting from 80%, 90%, and 100% charging limits. There is also a scheduled charging mode basically for overnight charging. If the mode is enabled, it automatically starts charging the battery at the right time to give you a fully charged battery in the morning at a preset time.

The ROG Phone 3 coming with its on-point design, powerful performance, 144Hz refresh rate, loud and spatial speakers, above-average camera, massive battery, and quick charging has now pushed the envelope for a gaming smartphone to become a well-rounded phone as well. However, the phone doesn’t include IP rating or wireless charging. Yet, it will find its customers who are fans of the tried and tested ROG lines.

If you are looking for the best gaming smartphone with extra features then ROG phone 3 is currently the best option available in the market. Those who are casual gamers but want to enjoy flagship features the ROG Phone 3 is also meant for them. But if you are not okay with its bulkiness and gaming design you do have other options like Oneplus 8 Pro available in the market but remember currently only ROG phone 3 is offering SD 865+ in India.

If you are looking for the best gaming smartphone with extra features then ROG phone 3 is currently the best option available in the market.