Infinix Smart 4 Plus Review: Buy It for Big Battery and Equally Big Display 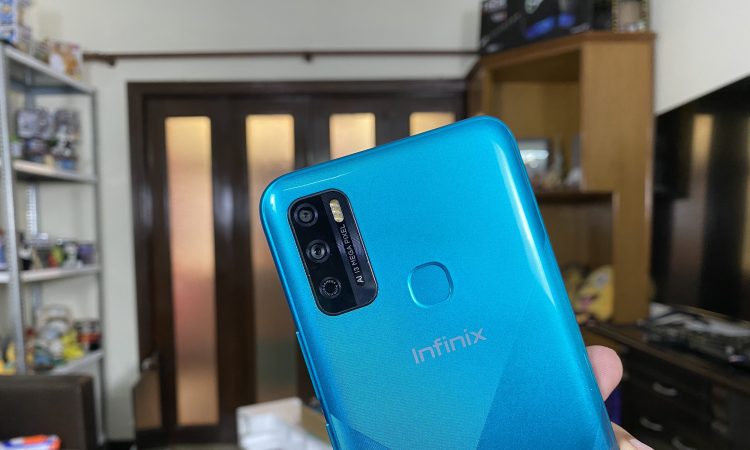 Hong Kong-based Transsion Holding’s subsidiary Infinix Mobile tries to pack as many features as possible in its smartphones at a real low price. The latest smartphone of the brand, the Infinix Smart 4 Plus is now on sale in India at a price of INR7,999.

And in that price, you get a phablet-like large display, a whopping 6,000mAh battery, dual rear cameras, octa-core processor, and yes, a fingerprint scanner as well. We have been using this smartphone for a few days and have found it to be a good option in the budget segment. We have shared our thoughts about different aspects of the phone in this review. Let’s check it out.

The Infinix Smart 4 Plus comes in one variant with 3GB RAM and 32GB internal storage, priced at INR 7,999. You can have had this device on Flipkart. The e-commerce website had a flash sale for the device on July 28, which was a success. The second flash sale is slated for August 10, stating at 8 PM.

The box we received had an Infinix Smart 4 Plus smartphone in Ocean Wave color. Alongside the smartphone, we found a 10W charging adapter, a Micro USB cable, a SIM ejector pin, a screen guard, a TPU case with texture, and the usual paper works.

First thing first, the Infinix Smart 4 Plus is tall and large with a 6.82-inch display in 20.5:9 aspect ratio. It is also heavy at 207 grams thanks to the massive 6,000mAh battery. And for that, in-hand feeling appears robust although the phone is made up of plastic. For protection, Infinix uses NEG glass instead of the Gorilla Glass. 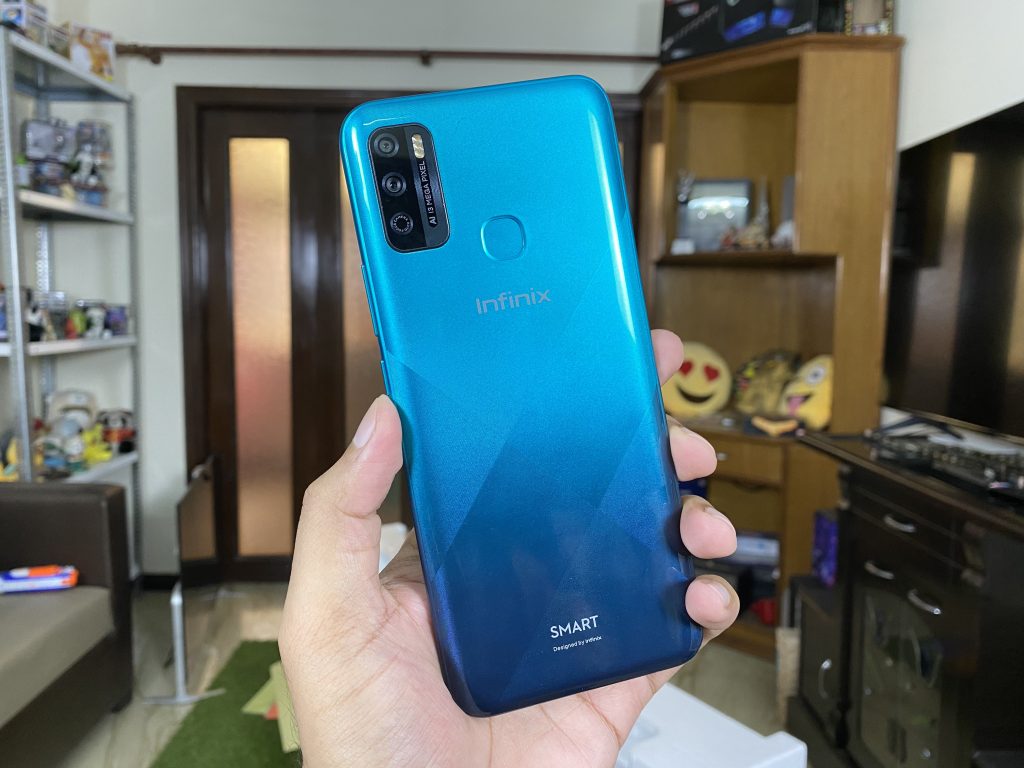 The smartphone flaunts an eye-catching design. Notably, the back looks beautiful with the so-called Gem Cut design. On a glossy back panel, these geometrical patterns enhance the look of the phone.

The back sports a fingerprint scanner and a rectangular camera module housing two cameras, a third dummy sensor, and a triple LED flash. The camera module is nearly flush with the body of the phone. On the front, the smartphone has a water-drop notch, which is not that big.

The bottom of the phone has a Micro USB port flanked by a 3.5mm headphone jack and a microphone. The speaker is front-firing, situated inside the earpiece. The top edge remains clean, with no holes. There is a power on/off button and a volume rocker on the right edge of the phone. The left edge wields a triple-slot SIM card tray with a dedicated microSD card slot.

The Infinix Smart 4 Plus has an HD+ (720×1640) LCD display that spans 6.82-inch diagonally. The display with a 90.5% screen-to-body ratio acquires quite a large footprint for an immersive viewing experience. Clarity and sharpness are pretty good in this price range. The display equipped with 480 nits of brightness appears bright, even outside- under the sun. It is Widevine L3 certified, which means you can watch YouTube videos below the HD resolution, which is just fine for a budget phone. 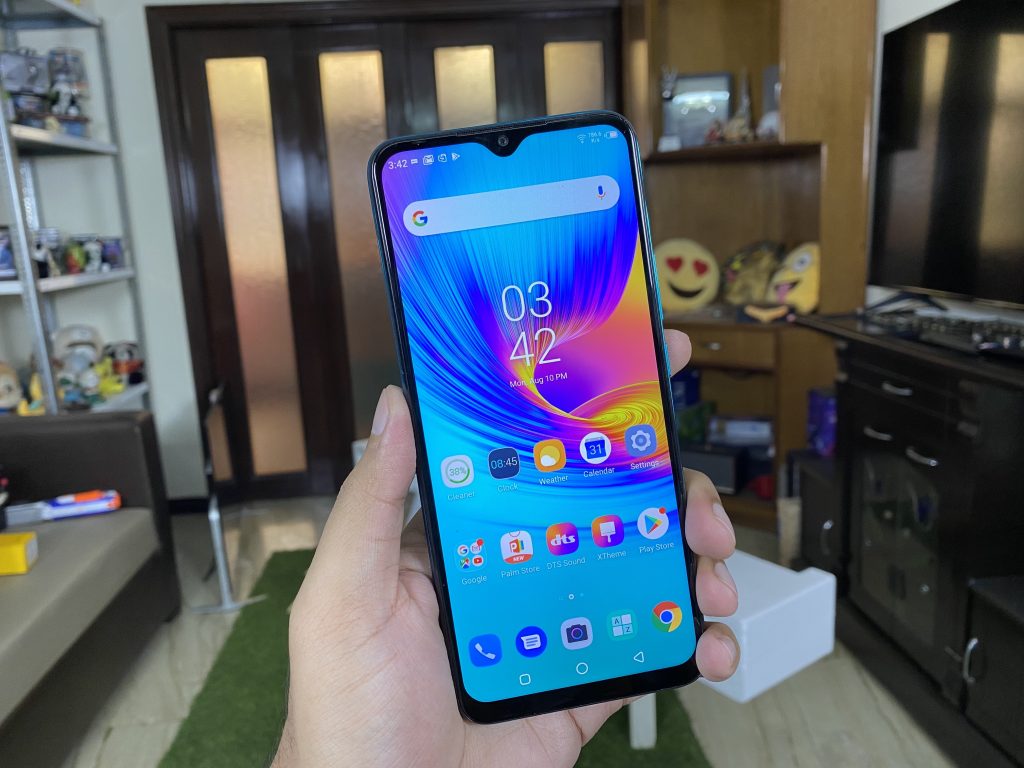 Unlike many other entry-level phones, the Infinix Smart 4 Plus comes with a fingerprint scanner at the back, decently quick and accurate. One can also use Face Unlock for biometric authentication.

Under the hood, the Infinix Smart 4 Plus has a MediaTek Helio A25 octa-core SoC, which is capable of seeing through the day-to-day activities. Opening and switching between the apps are well handled by 3GB RAM. To note, most of the phones in this segment come with 2GB RAM only. Even with entry-level hardware, the Infinix 4 Plus doesn’t give up on games like PUBG, albeit it plays with lags. 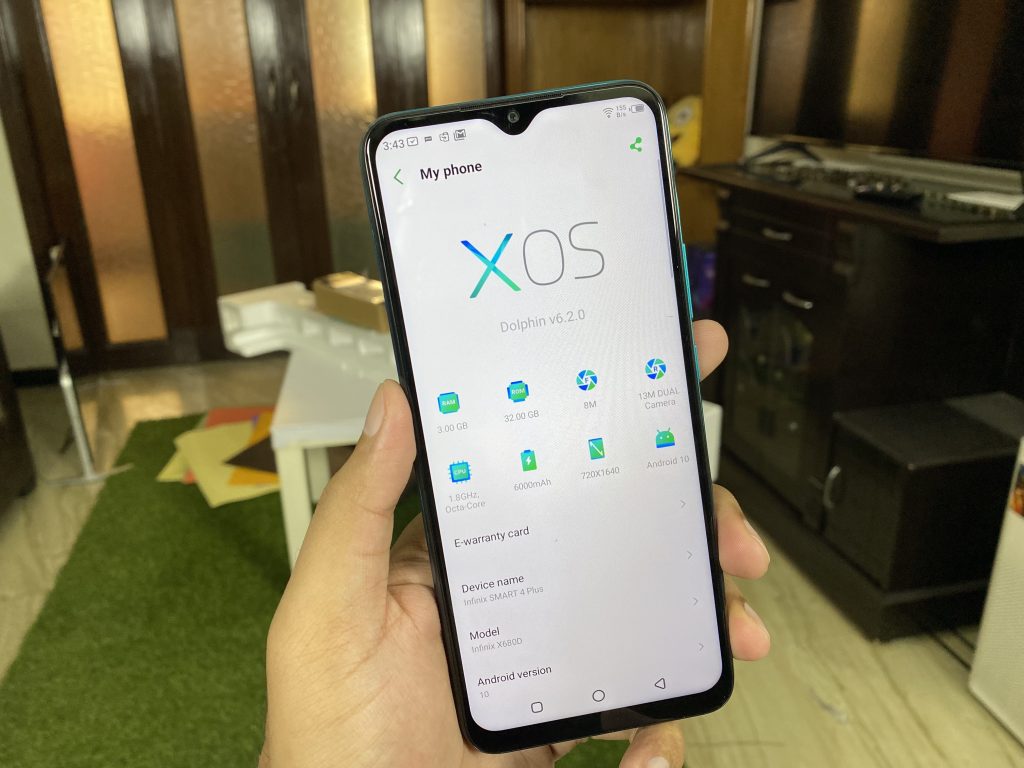 The phone’s call quality is good, even has support for Wi-Fi calling and Jio video calling. The speaker with DTS Audio support is loud, but not very clear. Audio delivered through earphones is clearer, though.

The Smart 4 Plus runs XOS 6.2 based on Android 10, which is not at the level of the Realm UI or MIUI but provides pretty satisfactory experience with some necessary features, including the dark mode. It has smart panel support that summons the essential apps and shortcuts for you if swiped from the edges. 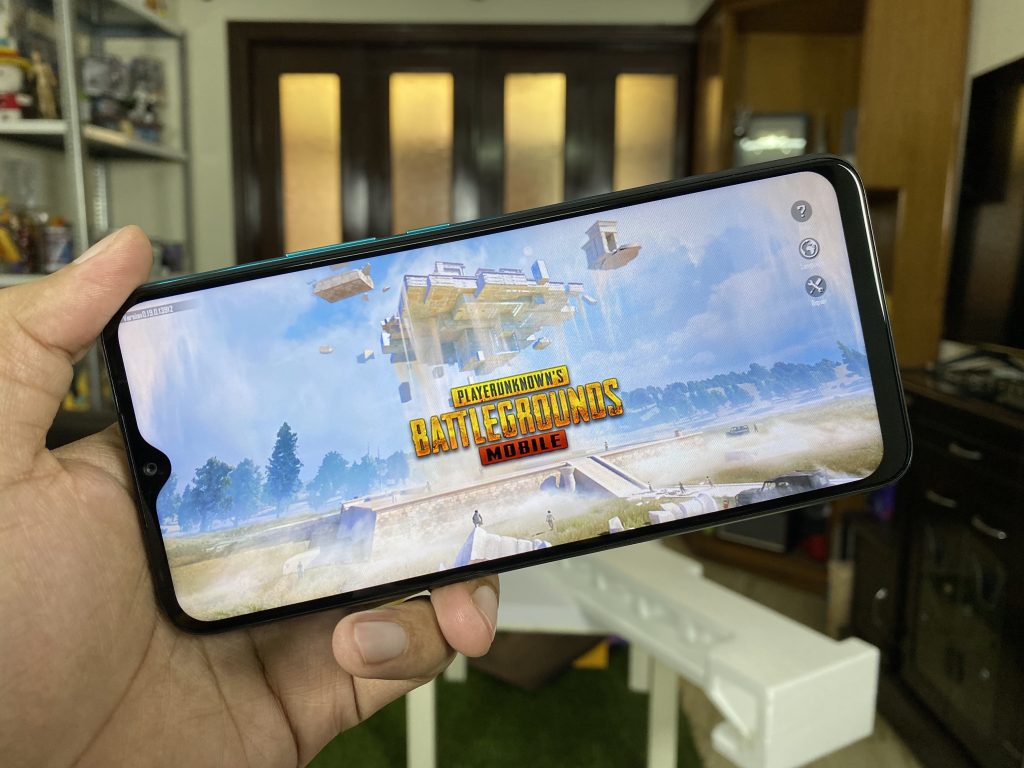 There is also an Instant App feature with a collection of apps that don’t require installation, yet the apps offer full functionality. The UI comes with a fair share of bloatware, but most of them can be blocked or uninstalled.

The Infinix Smart 4 Plus features two cameras at the back armed with triple LED flash. The cameras include a 13MP primary sensor with f/1.8 aperture and a depth sensor. Given the budget orientation of the phone, its primary camera captures bright images with good details. The portrait images are also good, but it could be better. Selfies taken from the front-facing 8MP f/2.0 camera is satisfactory, if not impressive. 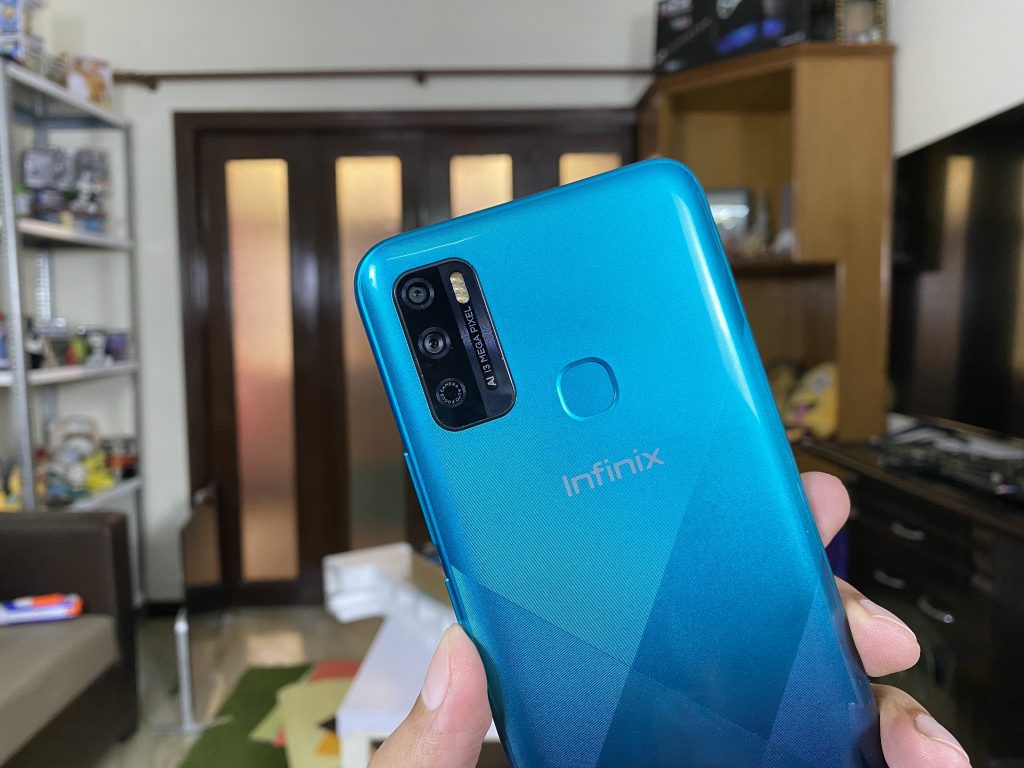 Both the rear and front cameras give good images in daylight conditions, even well-lit indoor conditions, but they falter when lighting conditions are not good. Lack of dark mode is a handicap here. One can take 1080p videos, but there is no stabilization support. Overall, the camera performance of the Infinix Smart 4 Plus is moderate. 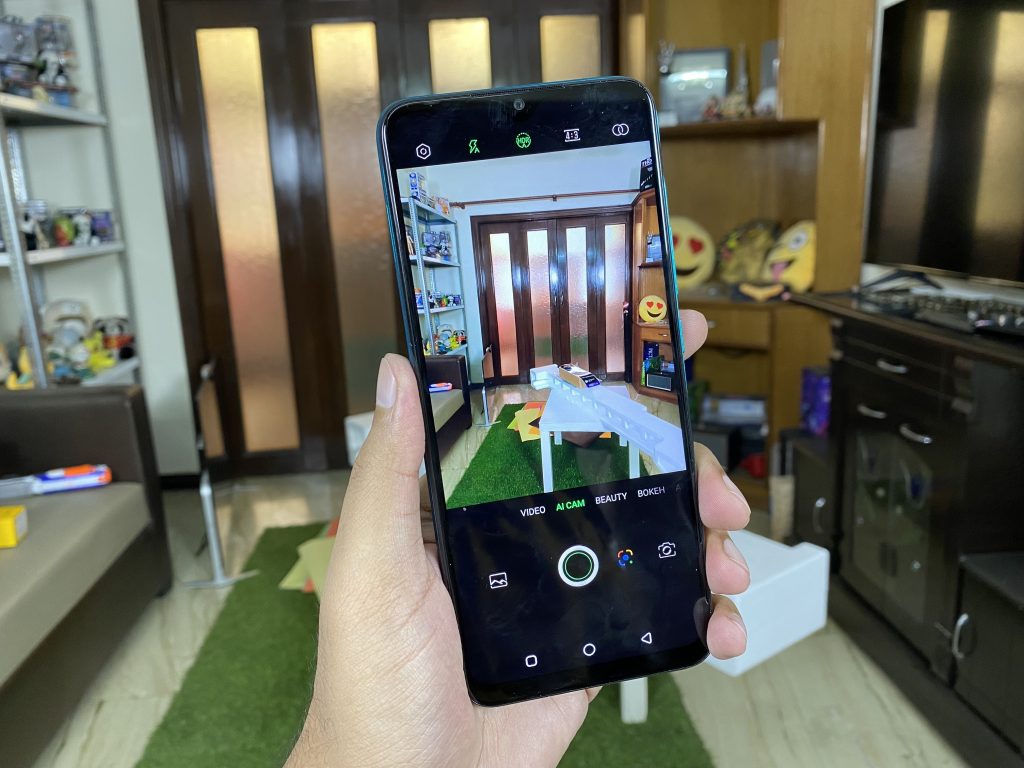 The main forte of the Infinix Smart 4 Plus is its massive 6,000mAh battery, which lasts up to two or even two and a half days on mixed to heavy usage. If you are an avid gamer, then also battery lasts quite long. The company touts 15 hours of continuous gaming support.

There is no fast charging support, so this large-size battery takes a whole lot of time to charge. Going from 0 to 100% takes an achingly long time- more than 3 hours. But once it is filled to the brim, it obstinately lasts longer than any other phone you may have used. 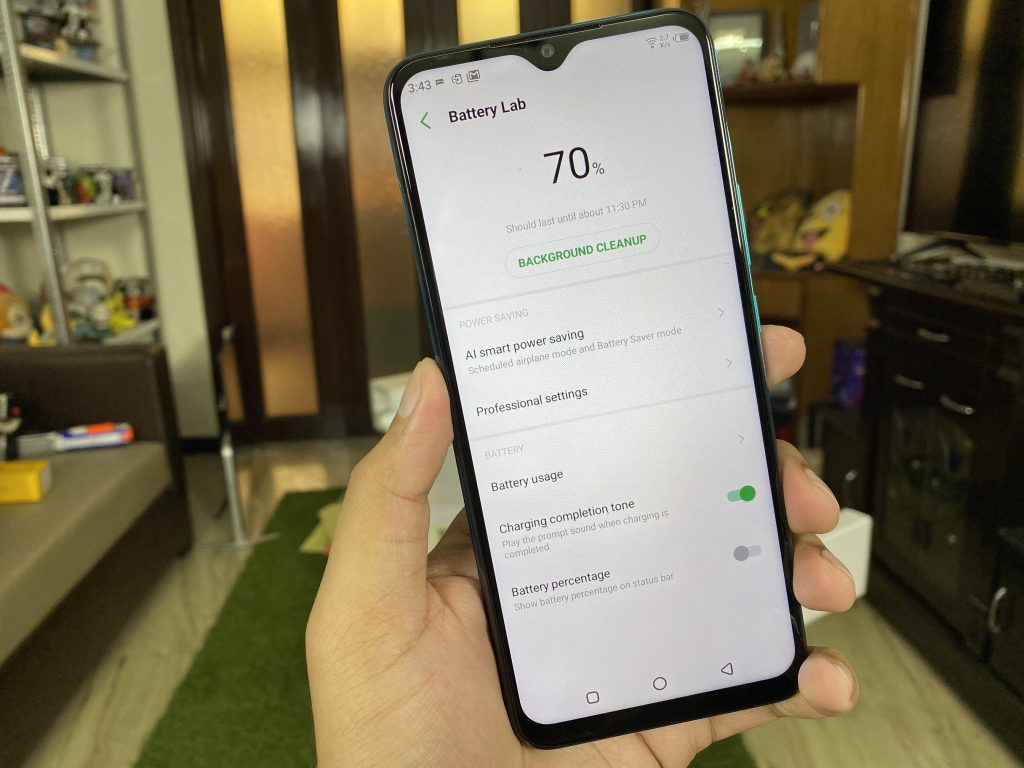 The Realme C11 offers a tad better photography experience with an addition of a night mode. At the same time, it has a slightly better processor than the Infinix Smart 4 Plus, but a paltry 2GB RAM limits it. On the other hand, the Infinix Smart 4 Plus ticks its boxes where they matter. It has a bigger and better display, 3GB RAM, a 6,000mAh battery, and a fingerprint scanner otherwise missing from the Realme C11.

So, if you take casual photos and love to watch videos on a big screen for long durations without fearing for the battery depletion, the Infinix Smart 4 Plus is the right option. To reiterate, the phone is exclusive to Flipkart, and August 10 is the next sale date.