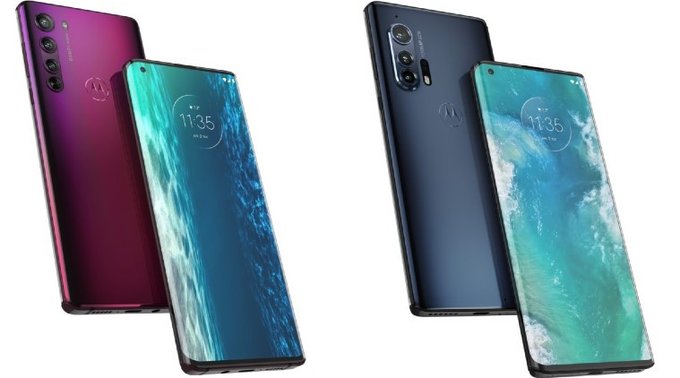 Breaking from the norm of steadily launching mid-range smartphones Motorola last month launched the Motorola Edge+, an out and out flagship phone in the US and the European market. Today the Lenovo-owned company has launched the same phone in India.

The Motorola Edge+ comes with a curved 90Hz OLED display, latest Snapdragon 865 SoC with 5G, and 108MP quad-camera as the salient attractions. The smartphone is launched in a single 12GB RAM+256GB storage variant in Smoky Sangria and Thunder Gray color options.

The Motorola Edge+ is priced at INR74,999 and will go on sale via Flipkart and major offline stores starting May 26 for which pre-booking has already begun. Transactions (both EMI and non-EMI) through ICICI credit cards will fetch buyers a flat INR7,500 instant discount.

Dwelling on the detailed specifications, the Motorola Edge+ is wrapped upfront with a 6.7-inch full HD+ curved OLED display with 90-degree steep curvature. It boasts of 19.5:9 aspect ratio, 90Hz refresh rate, and HDR10+ support. The Corning Gorilla 5 protects the phone from the rear to the front.

For power, the Motorola Edge+ has the latest 5G Qualcomm Snapdragon 865 SoC under the hood paired with Adreno 650 GPU, 12GB RAM, and 256GB default storage. There is no microSD card support for further storage expansion.

Out-of-the-box a stock-flavored Android 10 runs the show. The device is promised to receive software upgrade up to Android 12. The gestures support on the edges makes the phone easily navigable for all sorts of users.

Thanks to a 108MP led camera configuration the Motorola Edge+ earns another brownie point. There are four cameras at the back which include already-mentioned 108MP f/1.8 primary sensor, a 16MP f/2.2 117-degree ultra-wide sensor, an 8MP 3x optical zoom telephoto sensor with OIS support, and a ToF sensor.

A 25MP selfie shooter coming with f/2.0 aperture lurks inside a tiny punch-hole cutout at the top-left corner of the display.

In place of the usual batwing logo mounted physical fingerprint scanner at the back the Motorola Edge+ integrates the fingerprint scanner underneath the display. A massive 5,000mAh battery ticks everything inside. The battery is armed with 18W wired and 15W wireless fast charging support along with additional 5W reverse wireless charging.

To note, along with the Motorola Edge+ the vanilla Motorola Edge, a laddered down version with Snapdragon 765G SoC and 64MP triple camera was also shown the light last month. However, the same hasn’t been carried over to India today. Instead, we are going to see Helio P35 SoC-powered Moto G8 Power Lite day after tomorrow. Stay tuned.