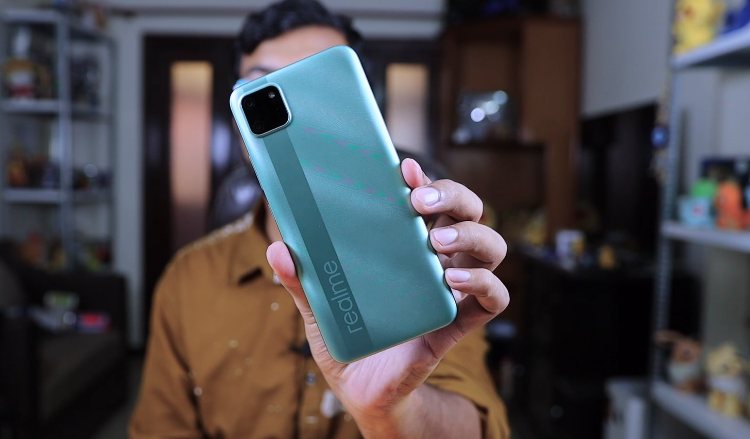 Realme recently launched the Realme C11 targeting the users who want a decently performing good looking smartphone at an affordable price. The Realme C11 is technically a successor to the Realme C3 with a significant leap of number in the moniker, but less significant specs bump.

Meanwhile, Realme has clarified that Realme C11 is not a direct successor to the Realme C3 but another addition to the budget-friendly C series. So, if the Realme C11 is a different smartphone, what specs and features it is equipped with and how it performs to create a niche for itself in the heavily competitive entry-level segment. We have tried to find that out in our review. Let’s dive in. 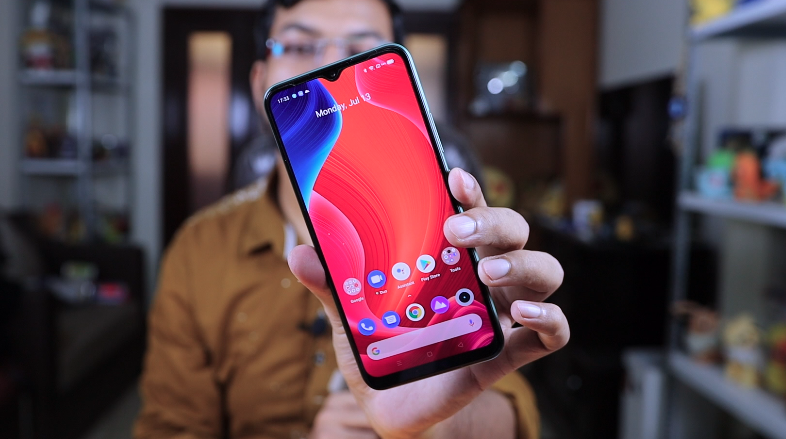 The Realme C11 is priced at INR7,499 coming in a single configuration with 2GB RAM and 32GB internal storage. It costs less than the existing Realme C3. The smartphone will be available to purchase starting July 22 via Flipkart and Realmle.com in two color options: Rich Green and Rich Gray.

We received the Realme C11 in Rich Green color option for the review purpose from inside a usual Realme Yellow-colored box. Besides the phone, the box content included a micro USB cable, a 10W charger, and lots of paper works. No silicon case, but that was not surprising given the entry-level orientation of the phone. The smartphone was pre-applied with a screen protector, however.

Design is the main highlight of the Realme C11. It looks eye-catching, especially the back, which has a textured matte finish made up of plastic. If not robust, it doesn’t feel fragile either. The rounded corners ensure good in hand feeling and better grip for the phone.

The back has an elongated strip that lies off-centre extending from top to the bottom on the left side of the back panel. Towards the bottom, the strip also bears a Realme branding in landscape mode. The square-shaped camera setup on the top-left corner falls in the strip’s line, giving the rear a pretty unique look. 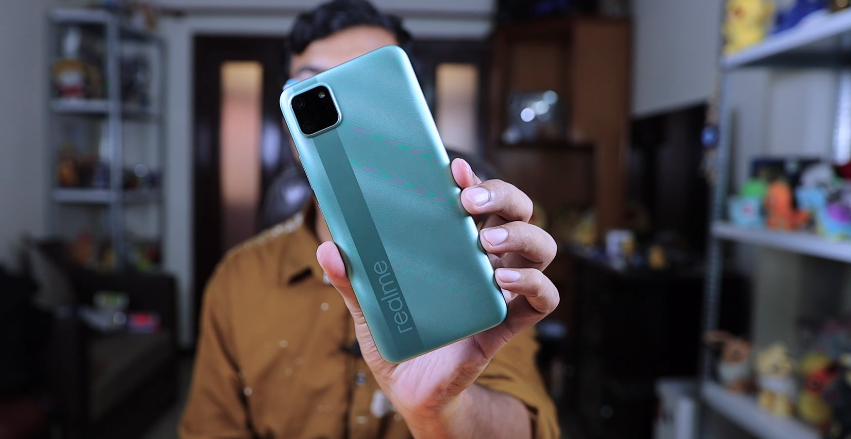 The front has a water-drop notch for the selfie camera. The bezels are thin, barring the chin. At 196 grams, it feels slightly heavier thanks to a big 5,000mAh battery housed inside.

The home button, as usual, is placed on the right spine just below the volume rockers. The left side has two nano SIM card slots and a dedicated microSD card slot for the storage expansion up to 256GB. The bottom features a 3.5mm headphone jack, micro-USB port, microphones, and a mono speaker.

The Realme C11 has a 6.5-inch LCD HD+ (720×1600) screen with a 20:9 aspect ratio. The display has a larger footprint due to the slim bezels, although except for the chin. It may not look good on paper, but the display looks sharp and bright, especially indoors. Outside legibility could be an issue, though. There is no Widevine L1 certification. And because of that, the OTT content will be played in standard definition only. The display offers good viewing angles as well. 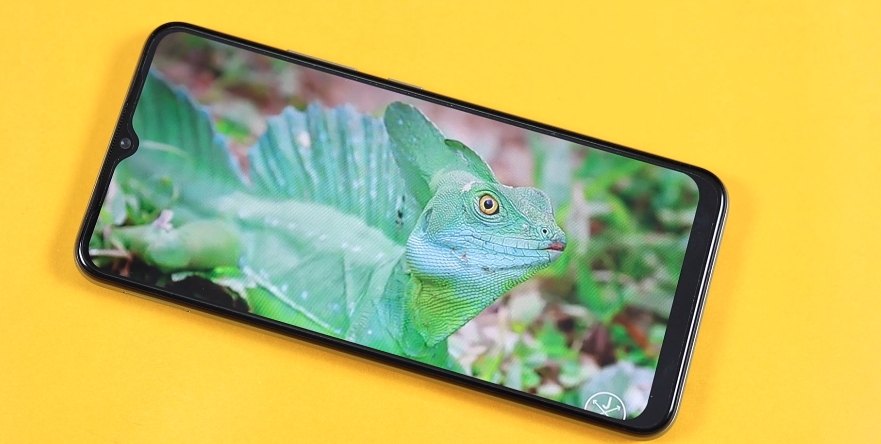 The Realme C11, for its budget orientation, misses out on a fingerprint scanner, leaving you to unlock the phone using a pattern or pin unlock method. By the way, you can make use of the face unlock feature, which we found to be working fine for this price range.

The Realme C11 uses the latest 12nm MediaTek Helio G35 octa-core chipset, which is gaming-centric and slightly improved over the Helio P35 in terms of speed. However, it is not as powerful as the Helio G70 that powers the Realme C3. Nevertheless, the Realme C11 manages to handle the day-to-day task just fine. Since there is mere 2GB RAM, it is advisable to shut down unnecessary apps from the background for a smooth and lighter experience. 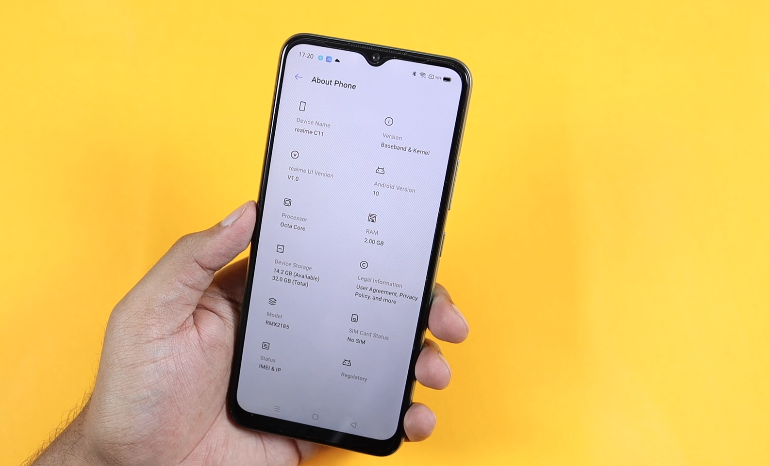 When it comes to gaming, the budget smartphone can handle normal games, but games like PUBG are way too demanding for a device of this price range. We played PUBG with the highest graphics set at Balanced+Medium while on the Realme C3, the graphics could go up to Smooth+Ultra or HD+High settings.

The frame rate settings remain consistently below 30 fps. The visuals were of a basic standard, and one could easily notice lags and stutters. The phone, however, didn’t heat much in 20-30 minutes of gaming.

The company is positioning the smartphone as a multimedia oriented device rather than flaunting any prowess in the gaming department. For audio, there is a single speaker that produces a well-balanced sound, although it is not loud enough. 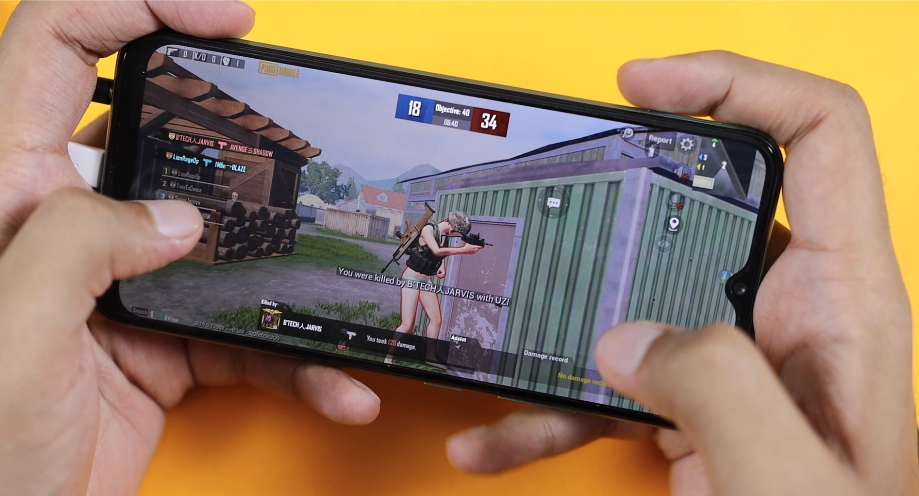 On the software end, the Realme C11 runs Realme UI based on Android 10, similar to what is seen in the Realme 3 and Realme’s newly minted Narzo series. It comes with pre-installed bloatware; however, a majority of which can be uninstalled, leaving a space of at least 20-22GB out of 32GB default storage. The UI is, for the most part, worked smoothly.

The camera setup at the back is big and protruding; however, it encompasses two sensors- a 13MP main sensor and a 2MP depth sensor. The images shot during the daytime surprisingly showed good color temperature and details. The portrait images were good, but edge detection misfired on certain occasions. The autofocus is not very prompt, so the close-up shots need some patience to get better results. 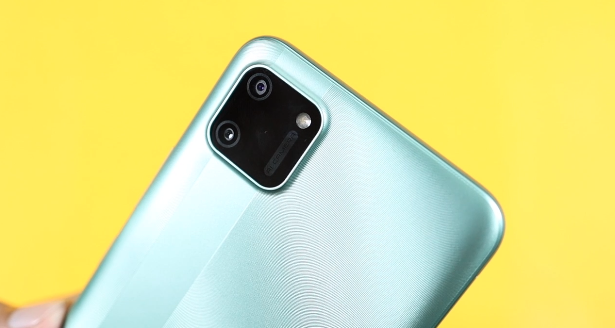 Cameras in the budget segment invariably struggle in low light. The Realme C11 is no different. But what is interesting is it has a Nightscape mode that otherwise is a rarity in this segment. The Nightscape mode improves the brightness level and the color of the images, if not the details.

The Nightscape mode isn’t available for the 5MP selfie camera, so the low light selfies with noises and compromised details are not good enough. However, the day time selfies are impressive vis-à-vis other phones in this price range. The portrait images shot by the front camera were okay but not on par with the ones shot using the rear camera. All things considered, our review found the overall camera performance of the Realme C11 to be satisfactory, given that it is a sub-8K smartphone.

Like the Realme C3, the Realme C11 also gets a large battery rated at 5,000mAh that easily lasts up to one and a half days or even two days with moderate to heavy usage. The battery supports 10W charging and fills up to 100 per cent in a little over 2 hours through micro-USB port.

According to the company’s claim, the battery could last 12.1 hours of gaming, 21.6 hours of video and 31.9 hours of calls, and 40 days of standby time. In the entry-level segment, users inevitably want a durable battery, and the Realme C11 doesn’t disappoint. We were easily able to get up to 2 days of battery backup with moderate to heavy usage. 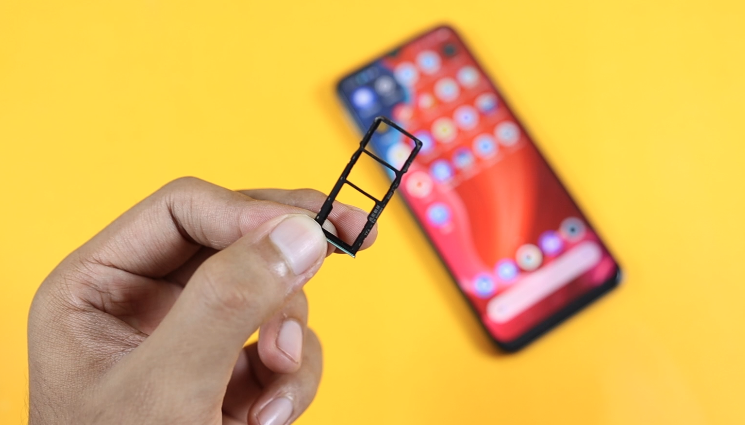 The Realme C11 lacks in processing power, but it gets a durable battery and fairly decent cameras for daylight images. Plus, the Realme C11 cuts the monotony that has crept into the affordable smartphones over time as it comes in refreshing back design. Nevertheless, we would have liked to see a 3GB RAM variant with 64GB storage. The absence of a fingerprint scanner may not go down well with some customers knowing that Realme’s Narzo 10 series, slotted just above the Realme C11, comes with it.

Anyways, the Realme C11 with a price tag of just INR7,499 barring a few aspects doesn’t leave much scope for complaints. The smartphone is capable enough for normal day to day usage. You can go for it if you are looking for a budget multimedia oriented smartphone. Under 7500 INR, it is surely a good multimedia option due to a big display and a big battery.